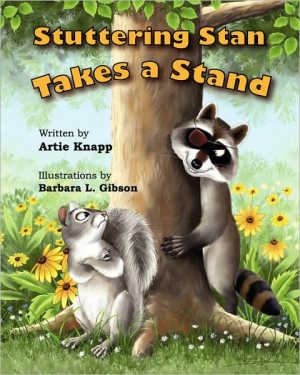 Often, the best way to deliver a serious message to young children is to go about it indirectly, which is what Artie Knapp does in his new book for ages 6 to 10, "Stuttering Stan Takes a Stand".

Stan, the story's protagonist, is a squirrel, and a cute little guy at that. "Stanley is like most squirrels," Knapp said during an interview. "He loves nuts, climbing trees and playing with friends. But Stanley feels different from the other animals in his neighborhood because he has a problem with words. Despite being teased about his stuttering, Stanley refuses to let on that his feelings are being hurt, until one day he learns an important lesson from a new friend."

That lesson drives everything in the narrative, and Barbara L. Gibson's beautiful illustrations bring it to life.

The plot unfolds smartly over 30 pages, complete with conflict, intrigue, rascality, love, friendship, humor and a resolution that surprises and satisfies. Children under 6 will enjoy this book if it is read to them.

Knapp has published children's literature in more than 80 newspapers and magazines worldwide. A library is named for him on the internationally acclaimed site candlelightstories.com.

There are few stories about children and stuttering, which is considered a serious disability. According to the Stuttering Foundation, it afflicts more than 3-million Americans, mostly males. Many of them go through life pretending, falling into silence, feeling angry, defensive or inferior.

Knapp's story will give courage to children who stutter, reassuring them that they have a valuable voice that others should hear. It also will help children who do not stutter become more understanding. This was a big challenge for such a simple tale, but Knapp pulls it off with class.